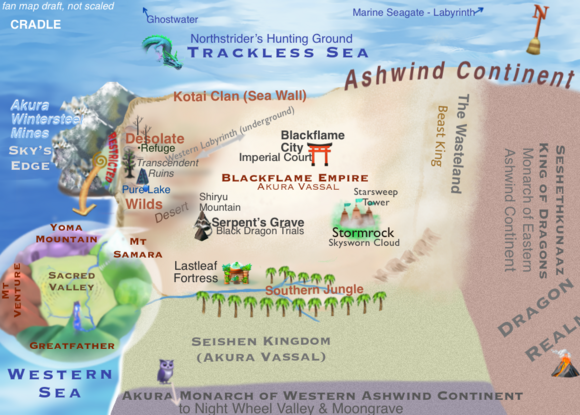 The Blackflame Empire is a relatively small political faction located on the northwestern edge of the vast Ashwind Continent. Blackflame emperor Naru Huan serves as vassal to the much larger and more powerful Akura clan, whose capital city Moongrave is located roughly 10,000 miles to the south. Akura Malice, a Monarch, controls all of western Ashwind Continent, including some islands. The dragon Seshethkunaaz controls most of the Eastern part of the continent. Akura has the biggest share of the continent. See history and political factions of the entire area at Ashwind History.

Below is the short version. More detail at Ashwind History

The empire is defended by the Skysworn, an elite defense organization. Headquarters are located in Starsweep Tower on Stormrock, a mobile cloud fortress/city.