This page addresses The Bleeding Phoenix and its Blood Shadows (some are characters) and its bloodspawn.
The Bleeding Phoenix is one of the four Dreadgods on Cradle, a monster of unimagineable power that even Monarchs hesitate to face. Like the other Dreadgods it spends much of its time sleeping, only waking to satisfy its endless hunger. The Dreadgod cult associated with the Bleeding Bird is Redmoon Hall, led by the psychotic Sage of Red Faith.

The Bleeding Phoenix, like the other Dreadgods, is the result of research and experimentation conducted in the Labyrinth beneath Sacred Valley, some millennia ago. The researchers attempted to address the problem of hunger aura. It was originally an unremarkable Dreadbeast when it was infused with hunger aura. It unexpectedly and quickly grew far beyond expectations. It eventually escaped confinement and entered the outside world. It always seeks to come back to the Labyrinth, and to Subject One, its maker. 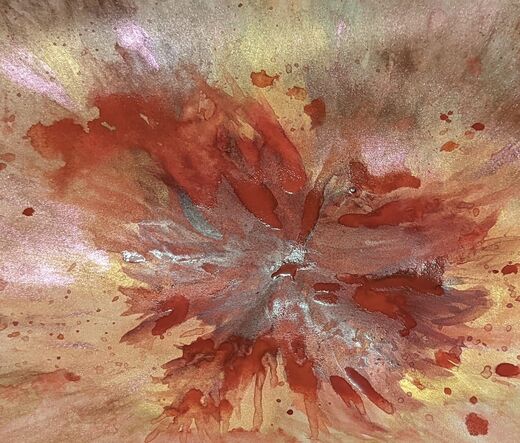 "It was so large as to defy description, swallowing half the sky and stretching into the clouds. Each of its feathers was an oozing, flowing blob, as though it had been made from clumps of crimson gel pushed together. Its beak was curved like a scythe and razor-sharp, and its eyes were shapeless masses of white-hot power." - Chapter 16 Skysworn

The Bleeding Phoenix possesses great physical strength, able to fight on equal ground with Akura Malice, during which she was using her bloodline ability, and shrug off blows from Northstrider. It also molts Blood Shadows and generates bloodspawn.

But, like all four monsters, Phoenix tires easily and just wants to feed and sleep. Or, as Dross tells Ziel, “Dreadgods don’t fight to the death. If the prey takes too much energy to beat, they back off.” (Bloodline ch 18)

In the Cradle series, some few Blood Shadows are actual characters, even though they are blood spirits. The ancient and psycho Sage of Red Faith founded the cult Redmoon Hall and was the first to develop the methodology for utilizing Blood Shadows to gain power and advance.
“Redmoon Hall. Other than wearing red and black, they had very little in common —- some were followed openly by their Blood Shadows, but others did not keep theirs visible.” (Uncrowned, ch 9).

The Bleeding Phoenix is the only Dreadgod that can be physically destroyed. However, it's only a temporary defeat, because the embattled bird molts thousands of its feathers as "Blood Shadows" that scatter far and wide. Each Blood Shadow carries a fragment of the Dreadgod's power and consciousness.
When a Blood Shadow finds a powerful sacred artist, it persuades the artist to allow it to nest in their core (like an egg). It promises power and glory. Then it parasitically begins feeding from the host's madra, blood, and life force. The Blood Shadow returns to the Bleeding Phoenix when it is “full” to deliver the stolen power. In this way, the Bleeding Phoenix gets stronger as it rests. This is the basis of power used by the emissary cultists of Redmoon Hall.

Mu Enkai and the Egg

Mu Enkai had been nothing before the egg. He was born a servant, following just enough of a fire Path to allow him to operate a furnace for a low-ranked refinery. He’d spent his days shoveling coals and choking in smoke, making barely enough scales to live on. Then the sky had turned red. He and his fellow servants had taken shelter in the cold furnace, huddling together for days before the earth stopped shaking and the air was no longer flooded with blood aura. When they emerged from hiding, shaking but alive, it had been waiting for him. The egg was a glossy, polished orb the size of a man’s head, waiting among the debris of the refiner’s shop. Unlike the building, it was unharmed. Spotless. Beautiful. He could feel its promise in his soul; the blood aura that had drowned the world for days was concentrated here. Enkai had never considered himself an ambitious man, but in the egg’s sleek shell, he’d seen his future. (Ghostwater, prologue)

Emissary Longhook -- An Underlord who gave up his family and entire life to succor his "egg" (blood shadow) and gain power from it. He sees himself becoming the second Sage of Redmoon Hall. His Blood Shadow is / was his long bloody hook. As he died, Eithan Arelius told him, "Everything ends."

”His Blood Shadow unfolded from behind him, striking out with a copied Rolling Earth technique. A fist of blood madra, dense as a hammer, struck out from his back. Longhook turned to follow up, but saw only darkness and rain. Something hit him in the back, and he was flying through the air again. . . But he needed an edge. Flexing his spirit, Longhook devoured his Blood Shadow. The red spirit let out a silent scream that cut into Longhook’s soul, and from its position behind Eithan, it began to dissolve into sparkling particles of red essence. As though caught in a swift breeze, the blood essence gusted toward Longhook. The power flooded into him.. .(Ghostwater, ch 13)

Emissary Yan Shoumei -- Underlady. Her Blood Shadow is a huge bloody beast she calls Crusher. He helped her compete in the Uncrowned King Tournament

Sage of Red Faith —- (aka The Blood Sage). He fed his Blood Shadow life energy and his own blood to control it, like a carrot, but it isn't truly loyal. So, it escaped his control and independently advanced to Herald. It now sits like a king, and dubs itself the Herald of Redmoon Hall. Or just Redmoon. (see book 10, and see Sage of Red Faith) 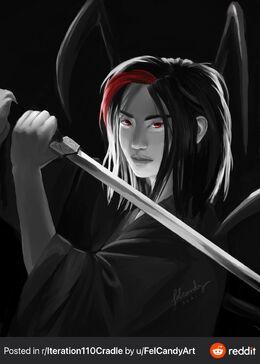 As far as we know, the only sacred artist to resist a Blood Shadow without dying — which is to say, a Dreadgod -— is Yerin, when she was only a child of seven. For almost ten years, she wore that Blood Shadow as a belt. Eventually, she began to utilize her unwelcome guest. This occurred first at the end of book 4, Skysworn, when the Bleeding Phoenix had passed overhead and her Shadow was trying to escape and attack.

He took one step closer to Northstrider, hopping from one foot to the other like a bird. “Yerin Arelius has laid the foundation for something extraordinary. This could be a breakthrough, not just in our understanding of the Phoenix and Blood Shadow advancement, but in how we all reach Monarch. We have an opportunity here to revolutionize the sacred arts, and I know you are not the sort of fool to let politics blind you to that chance.” Northstrider nodded once. Then he punched the Blood Sage. (Wintersteel, chapter 6)

“These are bloodspawn,” Eithan said, shaking the last stains off his scissors as the liquid madra evaporated. “They are the least of the Bleeding Phoenix's creations.” (Skysworn ch 9)

Bloodspawn are blood-hungry little agents of the Bleeding Phoenix. Within the Phoenix's miles-wide range of blood aura, natural spirits known as bloodspawn are formed. Vaguely humanoid in appearance, they rise from sources of blood, including open cuts on still-living people. (Skysworn, Chapter 9; Bloodline, Chapter 15) They aim to wound those around them, increasing their own numbers and providing more blood madra for Phoenix, their master.

Blood Shadows appear to be able to control bloodspawn. At least, Yerin could stop them, with her Blood Shadow, at the end of book 4, Skysworn.

As though that single drop of blood had been a seed, a creature sprouted in seconds. It was a doll of pure crimson, formed as though from solid blood, shaped like a man but only half the height. It had no features on its head, but it turned to Cassias like a hunting dog. It loped toward him, using its arms for balance, like an ape. Her master had called them bloodspawn, and they were the stuff of her nightmares. (Skysworn, ch 8)

"Bloodspawn, like little parodies of men constructed from blood madra and the will of the Phoenix. They were red puppets, some of them shifting to take on crude shapes of the madra of those they fed on. When they rose from the Kazan clan, they were mostly blocky clay men. . . Directly beneath Ziel, a bloodspawn’s head opened wide to feast on a fallen man. This was the one common aspect between all the Dreadgods: hunger. Those of them that Forged these spirits did so to feed." (Bloodline chapter 16)