Cradle is an enormous planet home to more than 300 billion souls, but so far through the book we have experienced only small portions of the world our characters call home. Books have thus far taken place in Sacred Valley, and in the Blackflame Empire, and in the Akura realm. All these lands are held by monarch Akura Malice. One book was set in Ghostwater (Pocket World), created and owned by the wandering Monarch of the Trackless Sea, Northstrider. It dissolved and is not accessible anymore.

Below: Fan-made interpretive map of the Blackflame Empire and border nations. Click to enlarge. 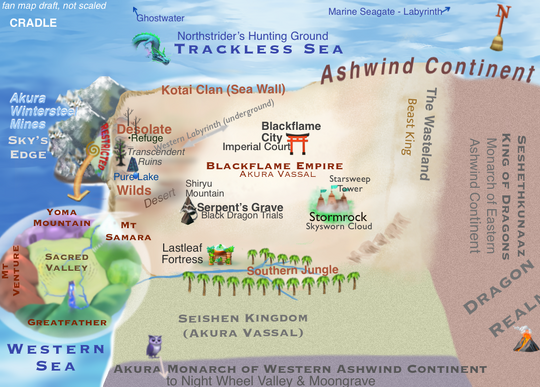 ".. .the city of Moongrave. From the outside, the Akura capital had looked less like a city and more like a fortress for evil giants. Remnants out of a nightmare guarded its black and spiked walls. Their physical manifestations were so detailed and solid that he almost mistook them for twisted sacred beasts. He hadn’t been able to see the end of the city’s walls, which stretched all the way into the horizon. Dark towers rose from behind the walls, and the cloudy sky crackled with purple lightning. The spiritual weight reminded him of the Night Wheel Valley, as though if he opened his perception too wide he would be blinded. From the inside, Moongrave gave off a different impression. It seemed as though everything inside had been designed by an artist, like a dark paradise. Carefully cultivated rows of glowing blue, white, and pink flowers flanked gardens of black trees that sheltered flickering, shadowy shapes. Remnants and sacred birds flew through the sky, often carrying passengers or pulling floating carriages." (Uncrowned

“Frozen Blade school?” Yerin’s eyes flicked to the Sage's sword against the wall. “They're going to be there?”

“They're one of the larger vassal factions under the Akura clan, so I imagine they will be.”

“So the Winter Sage will be too, then.” (Uncrowned)