The Eight-Man Empire is a group of eight people that can harness, collectively, the power of a Monarch. Individually, they are Sages or Heralds. [1][2]

Not a True Monarch

As a requirement to joining this group, the eight “men” /women are Heralds and Sages. No Monarchs, for then the armor couldn’t work. As a group, they do not generate hunger aura, as a Monarch does, even though they are as powerful as a Monarch when suited in their golden armor and working in unity. However, if their unity / formation is broken, they only have their individual strength and their individual Path to rely on.

Questioner: Does the Eight Man Empire generate hunger aura?
Will Wight: They do not.
(https://www.abidanarchive.com/events/25/#e1864)

Each member of the Eight-Man Empire practices his own separate Path, plus the "Path of the Eight-Fold Spear", which unites them in mind and spirit.

Path of the Eightfold Spear

“What the Empire calls “the Path of the Eightfold Spear” is not a Path in the traditional sense. It is a complex bond of mind and spirit woven through a network of Divine Treasures that allow the eight members of the Empire to access the powers of the other seven. In reality, each member of the Eight-Man Empire is on a separate Path.” (Wintersteel, ch 13)

(This unity may be similar to how Lindon is able to unite with Orthos, Dross, and even Little Blue — at least by the end of book 8, Wintersteel.)

They are associated with the Iceflower Continent, but they go where they want. They serve whatever cause they chose. Sometimes to the highest bidder.

[Western Chi Ning City. The Eight-Man Empire. Path of the Eightfold Spear.] “These eight call themselves an empire because they conquer wherever they roam,” Suriel said, striding through the room. (Unsouled, ch 11)

Individually, they are Heralds and Sages, but they can combine their strength using their Path of the Eight-Fold Spear to become equivalent to a Monarch (Wintersteel chapter 13). Suriel showed one of its members to Lindon and told him that, if he had the strength of the Eight-Man Empire, he would be able to save Sacred Valley from the Dreadgod attack (Unsouled, book 1)
We don’t know the names of all the members. Larian is the only character with any detail, so far. 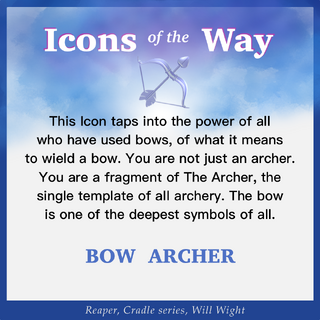 A Sage. As a child, she advanced far beyond her peers when she was only six years old.

"Suriel stopped with her palm hovering over one member of the Eight-Man Empire, a woman with yellow hair who lay facedown on a table, snoring. “Larian was raised in a noble household. Her father wouldn’t let her play with the other children until she reached the level you know as Gold. When she was six years old, she did.” (Unsouled, ch 11)

She is a virtuoso archer, beyond compare. Akura Mercy's reward for successfully completing the first trial of the Uncrowned King Tournament was a dream tablet from Larian, containing archery instruction (Uncrowned, Ch. 18) Later, Mercy learned even more from Larian’s memory, down in the Labyrinth (see book 10, Reaper).

Larian said. “At least it is a good cause, in the end.” Then she shed her casual appearance and adopted a manner more befitting a self-respecting Sage. “Long-Sight!” The Long-Sight war-band, beneath their banner of a bow and an eye, gave a shout and a pulse of spiritual power that shook the ground." (Reaper, ch 9)

The Eight-Man Empire is supported by eight war bands.

"From the lands all around the valley, war-bands of the Eight-Man Empire raised their banners. Not crude constructions of cloth and wood, but projections of symbols made of Forged madra. Ghost-Blade, Nine-Hands, Flame-Gift, Blood-Chorus.. .each of the eight wandering mercenary armies that made up the Eight-Man Empire’s workforce was arrayed against her. . .The war-bands averaged one Archlord, a handful of Overlords, and two or three dozen Underlords apiece, so only when they were gathered in one place could they possibly face down a Monarch’s forces. Just like the Eight-Man Empire themselves." (Reaper chapter 9)

Beginning Report: "They crafted eight Divine Treasures, suits of golden armor, that linked their wills together. It is unknown how sacred artists who never ventured beyond Cradle understood such principles so thoroughly, but Abidan intervention is suspected." (Wintersteel, ch 13)

According to Suriel, their golden armor is a cross between a Remnant and a Construct. She told Lindon: “Today, an army of ten thousand Gold-ranked sacred artists couldn’t scratch her armor.” (Unsouled, ch 11)

When one member dies, their armor is passed down to the next to join. "The Eight-Man Empire is always on the lookout for heirs to inherit their positions in the event of death or ascension. Their suits of armor can be passed down and repaired, but not replaced. Their experiment has never been successfully repeated." (Wintersteel ch 13)

Their platform was a tower with eight floors, each full of sacred artists and sacred beasts, with one member of the Empire per level. Later they were seen hovering together over the tower. (Uncrowned, Ch. 20)