Path of the White Fox

Elder Whisper is the original practitioner of the Path of the White Fox. He is a sacred beast, a white five-tailed snowfox. He lives in Sacred Valley. He’s a dream artist, using light aura aspects to create illusions. He can sometimes catch glimpses of Fate.

See artist’s instagram: felcandy. Like all Sacred Beasts, Elder Whisper is ancient, and skilled at using sacred arts. He’s a white snow-fox similar to those of traditional Asian legend. He has five tails. His foxfire magic is purple-white. He’s the size of a man. He is hundreds of years old, an original inhabitant of Sacred Valley.

Cold wind, crisp with the scents of a spring night, ruffled his white fur. Five bushy tails lashed behind him, tracing arcane patterns in the air that reminded Lindon of a script. “You have eaten of a wonderful fruit,” said the sacred fox. “Tell me the story.” (Unsouled, book 1)

Elder Whisper lives in Sacred Valley near Mount Samara, where light aura is found in plenty. He lives with the Wei clan. He appears fairly well treated, and doesn’t seem to mind that for some reason they lock him in his tall white tower. (Cradle, book 1, Unsouled). 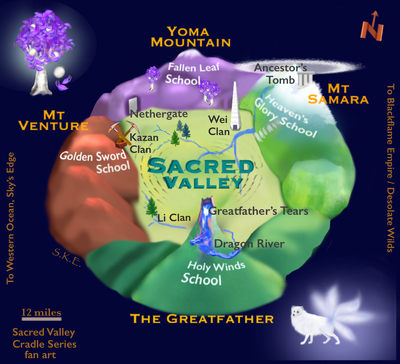 Elder Whisper lives in a tower which stands out, a needle of white, so tall that it seems thin. Rising above the purple roofed sea like a mast of a great ship. This is one of the most prominent landmarks in all Sacred Valley and was made in the age of the clans’ founders. The lock and key on his door are made of bronze, as big as a man’s head. There is a spirit trap on the door when the door is closed, it traps a sacred beast or remanent in place. If he escapes, there is a second one at bottom of stairs. There is an arch that touches the ceiling so he can see out, with a script to prevent him from running down the side. No one knows that this is pointless, as he leaves whenever he wishes. (Unsouled)

In book 1, Elder Whisper is kind to Lindon, and encourages him when everyone else has given up on him. (See section below). After Lindon leaves the Valley, the sacred beast holds open the void space belonging to the assassinated Sage of the Endless Sword so it won’t crumble away. He does this for several years. He trusts Lindon with a secret about the Labyrinth and Dreadgods. (see books 9 & 10).

Elder Whisper sat on his haunches,tails waving smoothly behind him.“Wei Shi Lindon. Would you like to know how to kill the Dreadgods?”(Bloodline, epilogue)

Elder Whisper is the original practitioner of the Path of the White Fox, which was created by, and named for, him. He uses light aura from the overhead rings of Mount Samara. Dreams. He can create illusions. The Wei clan follows this path, including Wei Shi Kelsa. He also has a slight connection to Fate.

Excerpt from Chapter 4, Unsouled “Humans understood light to some limited degree, but they had great difficulty with dreams. He had spent 100 years meditating on the nature of dreams. For the most part a dream was nothing more than a mind deceiving itself. Only rarely did dreams tap into greater forces, but when they did they could reveal pieces of fate. Over the years, Whisper had developed a sense of that fate. It was distant, imperfect, but he could dimly see the shapes of impending events.. .For centuries, the shape looming in his dreams has been dark and impossibly vast. It would crush them all beneath its ponderous weight, and there was no stopping it. Sacred Valley’s past was coming back and bringing death with it. But there was something strange about his premonition this time. Somehow, he felt as though the titanic threat were years distant and months close at the same time. One and then the other, like fate had yet to decide. Now, he saw the familiar shape of fate’s touch on the Unsouled: the resolve in his eyes, the agony of a difficult decision in the set of his shoulders, the timing of his appearance in the tower. The boy’s future was in flux. However it turned out, Whisper had done what he could. Now he would wait . . .and watch. (Unsouled, chapter 4)

“He watches two young sacred artists leaving the valley and for the first time in centuries, he experiences hope. Maybe these children, (Yerin and Lindon) blessed by the heavens will save the valley from the Dreadgods’ return”