Jai Chen was born into the Jai Clan, but she has been cast aside due to mangled madra channels when she was six years old. Her family is of high rank. She is the younger sister of Jai Long, who is eight years older than her. He was exiled to the Desolate Wilds at age 14, and took her along to care for her.

Skysworn excerpt, ch 4, Lindon's POV: 'He didn't mind seeing Jai Chen. About his age, she was small and pale, with soft black hair that tumbled down past her shoulders. Her wide eyes were fixed on the judge in an expression of concern, but when she saw Lindon looking at her, she turned to him. She was dressed in powder-blue robes cut longer and looser than the traditional sacred artist's robes, and her sleeves hid her hands until she raised one in his direction. She didn't smile—she still looked worried—but at least she had acknowledged him. That was a friendly gesture, right?'

Warm-hearted, loyal, trusting, patient, brave, long-suffering, yet still able to giggle at the absurd. Strong. Picked up the broken Ancestors Spear and used it to kill her enemy (Skysworn)

When she was six years old, Jai Chen suffered from a crippling disability (mangled madra channels) as the result of an attack by a remnant. She went to the Desolate Wilds with her brother Jai Long (he was then age 14) as he searched for a way to gain power and to heal her. She was healed by Wei Shi Lindon Arelius and Little Blue and seems to have unique, possibly living madra due to the attack and subsequent events.

Unclear. As a child, she was starting the Jai Clan path -- the Path of the Stellar Spear -- but what happened after she was injured? She did accidentally gain a touch of the famous Aurelius Bloodline Abilities (perception, to see) and some of Lindon's pure madra when she used the Ancestors Spear to kill her enemy while he was holding The Archstone -- a forbidden relic that had absorbed madra from the surrounding people (see Skysworn, also see Bloodline).

Eithan examines her, after she was exposed to the Archstone. Below, excerpt, Skysworn:

Eithan ran his spiritual sense through her soul. Thanks to Sylvan Riverseed's touch, her madra channels had been rebalanced, cleansed, and purified. Without that, she would have lost control of her madra and died already. As it was, she was just barely holding on. A sack stuffed to capacity and coming apart at the seams, but not in danger of bursting. “Unfortunately, there's nothing we can do for her,” Eithan said, and Jai Long's twisted face began to fall behind his mask. “...but fortunately, there's also no need. She will survive this. And her core will be filled with quite unique madra, so that's a treat. You were quite lucky that Lindon and I were here, and that Lindon's Blackflame core was empty, otherwise the madra would have reached a critical imbalance. As it is, none of our madra conflicted too badly with each other. They will blend together in her.” She would also gain some measure of the Arelius bloodline ability, though she would have to expend madra to use it, while Eithan's happened naturally. She really had ended up in quite a unique situation, and he looked forward to seeing how she handled it. “She will have difficulty controlling her madra for a while,” he continued. “But then...well, she has a unique Path ahead of her.”

“Jai Chen, you’ve been focusing on using your techniques with your contracted spirit as a medium. You don’t have to do that; not all your madra is taken up by him anymore. I’ll give you four basic techniques you can work on, and you can refine them on your own, but for now start cycling your madra separately from your dragon.”

"Jai Chen gave a sharp gasp, and he immediately stretched his perception out to her. Even with the support of the sect, she’d had a difficult time reaching Lowgold. There weren’t any Remnants with her unique blend of aspects, not to mention any appropriate scales. But since she had, her detection web had become easier to use and far more efficient."

Sometime after Lindon healed her, Jai Chen bonded / contracted with a tiny ferocious pink dragon-spirit. It seems to have come from her own living madra (see Blackflame). It can see up to a mile away and its madra dissolves enemies. It first appears in book 4, Skysworn, during Lindon's duel with Jai Long.

He spun his spear around, looking for the creature that had gotten behind him, only to see his sister holding a dragon by its tail. A serpentine dragon roared, surging from the space between her hands. It was like one of his snakes, only far more detailed: he could see a pair of whiskers on its face and scales on its body. It was tinged pink, like the light of dawn, and it raged into the bloody creatures with a majestic cry. They were splattered across the floor with the sheer momentum of its charge. Awed, Jai Long extended his spiritual perception. The substance of this creature felt like nothing he'd ever seen before. It was something like his own madra, corrupted by that Remnant long ago, which explained life in a creature that wasn't a Remnant. But at the same time, it was also...refined, in a way he couldn't describe. Like Jai Long's power had been boiled down, purified, perfected, and then strengthened. And there were elements that reminded him of a storm. It was a confusing, overwhelming mass of impressions, and he couldn't make sense of them before the dragon burst in a massive flash of essence, dissolving almost instantly. “I did it,” Jai Chen said, her smile broad. Then she collapsed.(Skysworn ch 9)

Jai Chen directed Fingerling, who breathed his strange pink madra over a bloodspawn that looked like it had been made from scarlet scissors strapped together to walk like a man. Fingerling’s breath didn’t behave like fire, or even fire madra, but like a dense cloud that passed over the jagged spawn and dissolved it. 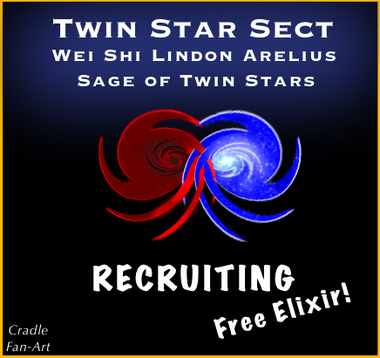 Excerpt REAPER: His sister, Jai Chen, wore a set of sacred artists robes trimmed in blue and burnt orange: the colors of the Twin Star sect. She wore the emblem proudly over her heart, and she moved as though it gave her endless energy. She bounced into the room beaming, and even her companion spirit danced around in midair as though he’d inherited the mood. Fingerling was a serpentine, finger-sized pink dragon that was the manifestation of Jai Chen’s power.