Path of the Frozen Blade

betrothed to Timaias Adama, Sage of the Endless Sword 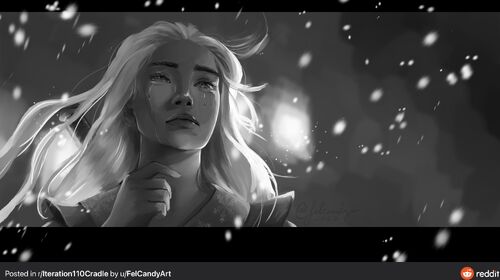 Her skin was tanned, her hair long and white, though she had the appearance of a young woman. A sword identical to Yerin's rested at her hip; it was the sister to the weapon she had gifted Yerin's master, long ago. Two swords, crafted by the Sage herself.(-Uncrowned, ch 9)

She dragged a gust of icy air with her. The new arrival looked young, perhaps midway through her twenties, with sun-browned skin and long, flowing white hair. She wore sky-blue sacred artist’s robes decorated with snowflakes like white flowers. Along the outside of her forearms ran a frozen line of ice down her skin. A straight-bladed sword hung in a blue sheath on her back. (-Uncrowned, ch 8)

Determined. Too emotional for Yerin’s taste. Likes animals. Seems to have strong opinions. Despite her strong will, she collaborated well enough with Akura Charity in mentoring Yerin for the final rounds of the Uncrowned King Tournament

The Frozen Blade School is a cold campus!

“Why would anyone choose to live here? …because they were a bunch of ice artists, and she knew that, but that didn’t make her enjoy it any more. Jagged blades of razor-sharp ice stuck out at chaotic angles from every snowbank, gathering the power of ice along with a silver edge of sword aura. These blades pressed close even to the network of wooden huts where Yerin stayed, making sure the aura was present for harvesting everywhere. And ensuring that every inch was as cold as possible. The Frozen Blade School owned a huge stretch of land” (Wintersteel chapter 7)

Min Shuei's school participated in the Uncrowned King Tournament but en route to the tournament, the dragon Herald Xorrus ambushed their cloudship, killing hundreds, including her best contenders. Together with Akura Charity, she mentored Yerin for the final rounds of the Uncrowned King Tournament. This training occurred at her Frozen Blade campus.

Ambushed!
“It was Xorrus,” the white-haired woman said, and
now her speech was tinged with hatred. “By the time
I sensed her strike, she was already flying away.”
(Uncrowned, chapter 8)

Tim. According to Yerin, the Sword Sage delayed his marriage to Min Sheui in order to take Yerin northwest for training. He took her to Sacred Valley to ask Subject One how to get rid of her Blood Shadow (see Wintersteel).

“The last time she had seen the Winter Sage, Yerin's master had delayed their engagement indefinitely in order to take Yerin northwest. On a quest to train her and potentially learn to keep her Blood Shadow under control. Min Shuei had...not taken it well. Yerin didn't think she'd ever met anyone who wore their emotions as openly as the Sage of the Frozen Blade. Yerin had once seen her cry because a rainstorm was too beautiful.” (Uncrowned, ch 9)

Min Shuei is also accomplished at soulsmithing and has forged two Wintersteel swords - one for herself and a twin for the Sword Sage.

. . . she raised her weapon into the air. It looked the same as Yerin’s. Hers couldn’t be the only white-bladed sword in the world, but Lindon recognized it immediately. He had been with Yerin when she’d pulled it from the Sword Sage’s body. This was exactly the same as the one Yerin carried, from the shape of the hilt to the length of the blade. (Uncrowned, ch 8)

Path of the Frozen Blade. She’s a sword sage. She has manifested both the sword and winter icon. Icy madra. Sword aura.

“Her sword is a blend of ice and sword madra. The feeling of a wintersteel blade.”

The Winter Sage bristled with rage, and icy madra spread to every corner of the ship. Lindon shivered, his skin prickling as sword-aura stung him in response to this woman’s anger. (Uncrowned, ch 8)