This path is defined by its unique attribute of requiring two cores. One core is maintained as a pure core and the other can be filled with a different aspect of Madra, allowing the user to use techniques from a second path. This is the path followed by Wei Shi Lindon Arelius throughout the series and he uses the Path of Black Flame as the path for his second core. Eventually, after Lindon achieves Sage rank, his mentor Eithan Arelius creates a sect in Lindon's honor. At Eithan's request, Jai Chen and Wei Shi Kelsa help recruit and organize the Twin Star Sect. 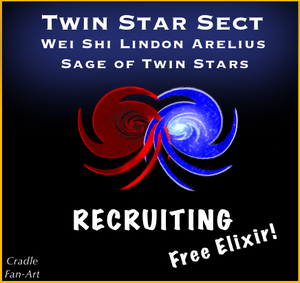