Sacred Beasts are ancient animals who can practice the sacred arts. Like humans, they can advance to great power. If advanced enough, they can take human shape.

Sacred Beasts are ancient animals that have attained sacred status by absorbing enough vital aura from their surroundings to advance in the sacred arts. Their advancement differs from how humans advance, but the specifics on how they differ is not yet well known.

If a fox or a turtle survived their first century, they would absorb enough vital aura from the world around them to ascend into sacred beasts. These animals cycled madra, advanced in power, and left Remnants just as humans did. The oldest of them could even speak, and legends said some could take human forms. (Book 1, Unsouled, page 7) 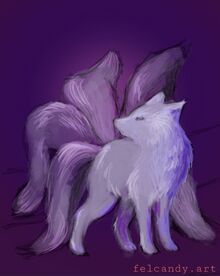 Cold wind, crisp with the scents of a spring night, ruffled his white fur. Five bushy tails lashed behind him, tracing arcane patterns in the air that reminded Lindon of a script. “You have eaten of a wonderful fruit,” said the sacred fox. “Tell me the story.” (Unsouled, book 1)