Sacred Valley is home to almost a million people who are split into three clans - the Wei, the Li and the Kazan.  The Cradle series centers around Wei Shi Lindon Arelius, born into the Shi family of the Wei clan. Additionally, the series includes his sister Wei Shi Kelsa, as well as his mother Wei Shi Seisha and father Wei Shi Jaran. There is also a sacred snowfox, Elder Whisper. A main antagonist in book 1 is Li Markuth, a long-gone Grand Patriarch of the Li clan.

“We're going to the very outskirts of imperial territory,” she said... “People there have forgotten about the Empire.” (Skysworn, ch 9) 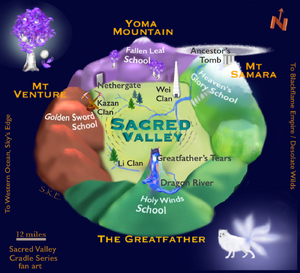 The four mountains bracketing Sacred Valley are known to the locals as the “holy peaks,” locations of myth and mystery. The four largest schools in the region have each claimed a peak as their home, and the secrets found within have given these organizations strong roots.
To the east, Mount Samara is the most prominent and the tallest of the four holy peaks. It is blanketed in snow, and crowned in a ring of pale white light, called Samara's Halo, that circles the summit. The halo appears at sundown and disappears at sunrise, so that no one in Sacred Valley has ever experienced a dark night. Samara’s halo is a construction of light aura bound into form by an expert centuries or millennia past, and it is the reason why so many sacred artists in the valley practice light-aspect arts. The Heaven's Glory School has claimed this peak, using the power of Samara’s ring to gather light aura even on a moonless night. The Wei Clan, and the sacred beast Elder Whisper, live in the northeast part of Sacred Valley. The ancient snowfox has five tails and is often found up in his white tower. He's highly respected by the Wei clan as one of the original founders.

To the north, Yoma Mountain is carpeted in purple orus trees for most of the year. The Fallen Leaf School processes the fruits of these trees into products to be sold, as well as secret elixirs to strengthen their own students. They also possess the largest and most obvious entrance into the labyrinth that forms the foundation of the entire Sacred Valley, an entrance they call the Nethergate. The door stands thirty meters high, and is carved with the image of a Dreadgod. Every ten years, it opens, and the Fallen Leaf elders are able to retrieve some treasures from the shallowest levels of the labyrinth within.

To the west, Mount Venture shows off its distinct mineral composition with rust-red cliffs. It is the shortest of the four peaks, and most of the mining in Sacred Valley takes place here. This is the home of the Kazan clan and the territory of the Golden Sword School, and the profits of the mine are split between them. Goldsteel and halfsilver are the most valuable product of these mines. (Further west, Wintersteel is mined at Sky's Edge, but that is not part of Sacred Valley.)

To the south, the mountain called The Greatfather is broken, its peak shattered into a shape resembling the mouth of a bottle. Water pools up there, cascading down the cliffs in a stream known as the Dragon River. Fueled by the water aura at the top of the mountain, storms wrack these slopes year-round, and the Holy Wind School maintains shelters for unlucky travelers caught outside. Favored Holy Wind School elders can bathe in the pool known as Greatfather’s Tears, regenerating their vitality of body and spirit. The Li Clan occupies territory near this mountain.

See also where Sacred Valley is located on a map of Blackflame Empire, Cradle.

Suriel waved a hand, and four green lights shone like beacons in Lindon’s vision. One on each of the holy peaks, burning like emerald bonfires. “There is an exit on each of the peaks, guarded by one of the Schools.” She hesitated a moment as though searching for a specific memory. “But leaving will be very difficult.” (Unsouled, ch 11)

Three clans inhabit Sacred Valley, along with a number of clanless outcasts. The ostentatious Li Clan has territory to the south, near The Greatfather mountain. This clan was founded by Li Markuth, long ago. The Wei Clan live in the northeast, between Mount Samara and Yoma Mountain. Their territory surrounds the white tower of the sacred beast, an ancient snow-fox named Elder Whisper. The Kazan Clan occupy the West, near Mount Venture, a mining area.

Lindon stared.. .no one had left Sacred Valley for a hundred generations. It was a desolate landscape beyond the mountains, a nightmare from the lowest hells. All the books said so. (Unsouled, ch 11)

The people of Sacred Valley have isolated themselves in their valley and have lost much basic knowledge of madra and history. This labyrinth is restricted from exploration by the Monarch Akura Malice (see Ashwind History). Thus, the inhabitants are ignorant, simple, and weak compared to the neighboring Blackflame Empire.
They believe that Jade is the highest Rank and few of their members ever achieve it. To them the rank of Gold is mythical. They also think that each sacred artist is limited at birth to be either an Enforcer, a Ruler, a Striker, or a Forger, and that it is impossible for an individual to learn techniques outside their own category.

Every six months the clans of the Sacred Valley hold a Spiritual Origin test. Untested children of ages six, seven, or eight come wearing formal clothing and, one by one, place a hand into a bowl full of liquid Madra. The reaction of the Madra reveals "the nature of their spirit" as determined by the heavens.

Wei Shi Lindon took the test seventeen times and was Unsouled every time.

It is later revealed by Yerin that this test merely reveals a persons innate talents. Thus, if the "Spiritual Origin test" determins you to be a Ruler or an Enforcer this indicates a natural disposition towards that field instead of, as the people of Sacred Valley believe, a solid predetermination of a persons path.

The ancient Labyrinth that stretches under much of the rest of the Ashwind Continent, and beyond, also extends to Sacred Valley. The labyrinth beneath Sacred Valley holds Subject One, the progenitor of the four dreadgods, such as the Bleeding Phoenix . The script formation which weakens the valley was created to keep Subject One suppressed. Subject One is the source of the hunger madra found in the Labyrinth, which also helped weaken the Sage of the Endless Sword. This hunger madra also forms the basis of the bindings found in Lindon's remnant arm, as well as the Ancestor's Spear wielded by the Jai clan.