View source
watch 01:36
We're Getting Mutants in the MCU - The Loop
Do you like this video?
Play Sound

“Sages and Monarchs can command reality directly, but as you can imagine, there are limitations. We can only affect the world in certain ways related to our Icons, and we call the scope of that power our authority.” (Wintersteel ch 7)

(Icons are included also on the list of Magical Items)

An Icon is a powerful symbol. It is a signature of Authority, bestowed by the mystical Way. A Lord manifests an Icon when the Way recognizes him/her as the living embodiment of a concept.

"To become a Sage, you have to contact a greater power, a symbol of a greater concept of reality. We call that symbol an Icon.” (Wintersteel, ch 7, Min Shuei the Winter Sage, speaking to Yerin) 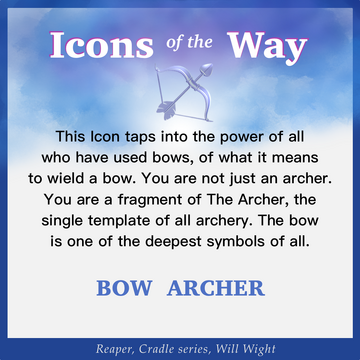 An Icon is an embodiment of a concept greater than humanity and the mark of a Sage. Those who are able to manifest an Icon gain the ability to command reality itself and to brush against The Way. Below is a list of all currently known Icons with the corresponding Sage.

“In the past, the concept of a Sage was much more. . .fluid. . .than it is today. When manifesting an Icon, it is very important to understand the significance of your madra and to sense it deeply. Equally important is some kind of technique to regularly train your willpower. For years. An exercise that pushes your focus and concentration ever further, and that most people would give up or abandon for easier trails…. . . “Now, the specific Icon you manifest depends not only on the nature of your madra currently, but on a concept that has always been core to your identity. Even in childhood." (Wintersteel, ch 27, Eithan speaking to Lindon)

In alphabetical order. Add more finds to the list

There is also a Sage in the Wasteland, but little is known:

Miles behind Malice, the unaffiliated experts of the Wasteland received her transmitted message and removed their veils. Three Heralds, a Sage, and five ancient Archlords. (Reaper, ch 9)

“A woman with a bow taps into the power of all who have used bows, of what it means to wield a bow,” she continued. “You are not just an archer. You are a fragment of The Archer, the single template of all archery. The bow is one of the deepest symbols of all.” There was a trace of that concept in her mother’s archery. The Bow Icon, The Archer, whatever you wanted to call it. (Reaper, ch 17)

Lindon is the Void Sage. For details, see Void Icon

In Book #8, Cladia Arelius, Sage of a Thousand Eyes, is clearly called the Oracle Sage, by Eithan himself. (Wintersteel ch 7). However, in book 10, Eithan makes a telling statement:

If I’m close to Sage—especially the Oracle Icon, which I was once considered a prime candidate to manifest—then I could be picking up hints of another Sage or Monarch’s working. It could be a working you are too inexperienced to recognize, or something too far away from the realm of the Void Icon.” (Reaper ch 7)