A Soulsmith makes constructs, using some kind of base materials, their own madra, bindings from Remnants, and possibly Scripts. They are forgers. The soulsmith’s logo is crossed hammers. There is traditional soulsmithing and advanced work with a soulforge. Few soulsmiths work at the level of authority and expertise demonstrated by history’s greats.

Beginning report… Soulsmiths are craftsmen who work with the stuff of spirits. They form constructs, steal bindings from Remnants and transplant them into sacred artists, and forge weapons. The art of a Soulsmith is honored and distinguished, and it requires no qualities more highly than a sharp memory and a dedication to experimentation. (Soulsmith chapter 11)

The Stuff of Souls

“Soulsmithing is blending three elements,” she said. She had given him this lecture before, but he still focused on every word. A mistake here might mean weeks of going without an arm. “You have the binding, the material of the construct itself, and the Soulsmith's madra, hm? But unlike blending physical materials, you are working with the stuff of souls. Madra lives. It changes.. . It's no good making a weapon that will turn on its owner. But even with the best drudge in the world and years of experience, we are working with living components. No two constructs are exactly the same.” (Skysworn, chapter 12)

To be a good soulsmith one must have either pure madra — which can work with anything —- or a compatible madra, because a soulsmith forges his/her own madra into the work. (see madra and aura)

From the author, Will Wight:

We touch on this in Blackflame a little bit, but you have to have madra that's compatible with a lot of other aspects. For instance, the Fishers make good Soulsmiths because they have madra that mimics gravity. So it binds two things together. Not a whole lot conflicts with that. But if you were a Sandviper Soulsmith, every construct you made would be poisonous or acidic, so it would either hurt the person holding it, fall apart, or neutralize the madra you tried to use to build it.

Daniel: Huh, so the greatest soulsmith would theoretically have to have pure madra because that would conflict with nothing?

The most essential tool for soulsmithing is a drudge — a constructed assistant with knowledge of madra and aura, etc. The more the drudge knows, the better chance for success. Every soulsmith has one. Dross is a drudge — perhaps the most advanced on Cradle, because he swallowed the amazing library from House Arelius

Drudges were all the tools a Soulsmith required rolled into one. They could measure madra output, determine its aspects, analyze the parts of a Remnant, and even help separate that Remnant into its components with minimal loss. Soulsmithing primarily revolved around deconstructing and reconstructing Remnants to take advantage of their unique properties, and without a drudge, it was almost impossible to do so accurately. Like a surgeon operating with her hands taped together and one eye shut. (Unsouled, ch 9)

Bindings are the physical manifestations of techniques, harvested from Remnants, formed in the spirits of sacred beasts, sacred trees, and human sacred artists. Most often, bindings are combined with dead matter, goldsteel, and /or mundane materials to produce tools and weapons, but can be used independently. Bindings can be dangerous, so soulsmiths use a goldsteel tongs to grasp it.

The binding is "a crystallized technique, the heart of any construct. Without it, a construct would only have the properties of its material and whatever scripts they added on top. That would make it no better than any scripted object." Soulsmiths must also have goldsteel-plated tongs, to grasp the binding. (Skysworn, ch 12)

The black sword was called Netherclaw, named for the beast that guarded the Netherworld in the mythology of some culture Yerin didn’t care about. It was used by a slaughter artist centuries ago, an Archlord on a Path of blood and sword madra that had murdered anyone he came across to harvest their aura. He had eventually been stopped by a Sage —- the Sage of Red Faith, in fact, though Yerin had a hard time imagining him saving anyone’s life, even by accident. Its binding was an advanced Forger technique, filled with the will of the murderer who had left it behind. Yerin had tried to activate it herself, but her compatibility with the sword was pitiful.. . Ruby could use the technique just fine . . . Scarlet madra Forged in lines over Ruby’s sword, weaving itself strand by strand, growing in power and intensity. (Wintersteel ch 21)

A soulsmiths adds layers of scripts to their work. The author says: "Scripting is unique to Cradle, but other worlds have similar systems for guiding, shaping, or controlling their native energy." (https://www.abidanarchive.com/events/1/#e78)
The author also says: 'Scripts do make a small noise when they activate! It’s something like the strike of a match followed by a hum like a power line, though for many scripts, that sound fades away. As for the sounds of techniques, that depends on the nature of the madra and the technique itself. As you say, something like dragon’s breath would make a sound because of its heat (and because of its destruction component tearing apart whatever it hits), but something like the Path of the White Fox would make no sound).(see https://www.abidanarchive.com/events/7/#e6250

Uses Archlord level soulfire. It’s gray, and typically the highest on Cradle, except the blue fire in Lindon’s anvil is different.

“In traditional Soulsmithing, Archlord artifacts are effectively the peak. There is no higher form of soulfire than that which Archlords produce, and spirits are usually raised past that stage artificially. Beings stronger than Archlords don’t often die and leave Remnants, you see. ” (Reaper ch 12)

Archlord-level weapons and devices are typically the most advanced on Cradle. For example, even the pocket world Ghostwater was made with Archlord soulfire.

Lindon’s voice was strained with the effort of keeping the hammer half-existing. “What about soulfire?” “What do you think that is?” Eithan pointed down to the blue flame in the center of the altar. Aside from the fact that they were both in the form of fire, the flame in this altar had very little resemblance to soulfire. Especially since Archlord soulfire was its highest level, and that looked like quicksilver. Even Ghostwater had been formed with Archlord soulfire, not this . . .blue kind. (Reaper, ch 18) 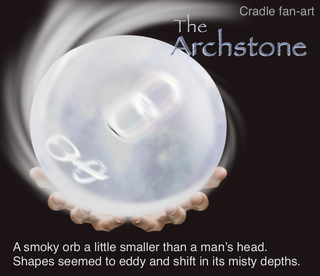 “The Soulforge: The Ultimate Soulsmithing Tool”

Lindon drew Suriel’s marble from his pocket and compared. As he’d suspected, the blue fire in his marble was eerily similar to the one blazing within the altar. Except the one here was many times bigger. “Lindon, allow me to introduce you to the ultimate Soulsmithing tool: the Soulforge.” (Reaper, ch 12)

An advanced soulsmithing technique uses a soulforge with a wintersteel anvil, soulfire, madra, and a soulforged hammer. A smith uses a soulforged hammer to imbue their will into the object. They burn significant objects, imbued with power, authority, and/or history, like a treasured set of pearls worn at an important event, or a monarch’s signet ring. Finally, the result is even better if they work the forge at a relevant location, meaningful to the objective. (Reaper, ch 12)

Eithan swept his arms around the Soulforge. “If you really want to perform Soulsmithing on a higher level, you need a way to imbue the authority and willpower of a greater existence into the item. That requires tools and locations on a superior tier of existence, which are few and far between. If you wanted to forge a Monarch a sword, for instance, you would want to do it on a battlefield in which Monarchs died, of which there are surpassingly few.” (Reaper, ch 12)

“Ozmanthus’ black hammer cracked against the gleaming chunk of wintersteel. He poured his madra into it, his soulfire, and his desperate wish for destruction. His hammer amplified his wish, focusing his will, forming the metal into a perfect tool of elimination.” (Reaper, ch 12)

Over the millennia, some truly great soulsmiths forged their wonders down in the Labyrinth. “This labyrinth contains tools from some of the greatest Soulsmiths of all time,” (-Reaper, ch 8) Ozmanthus Arelius, the historic House Arelius founder and patriarch, was one of history’s greatest soulforgers. He learned by genius insight and by studying the notes of the first court of Abidan, left behind in their Labyrinth.

“Ozmanthus Arelius, the original Patriarch of our clan, was known as the greatest Soulsmith of his day,” Eithan explained. “Perhaps in history.” (Reaper, ch 9)

It is likely that whoever made the Dreadgods were expert soulsmiths, too.


Wei Shi Lindon Arelius is becoming an advanced soulsmith, too. In book 10, Reaper, he is a Lord, so he produces soulfire. Eithan gives him Shen’s soulforge, and with Eithan’s instructions he forges his hammer Genesis. Creation and destruction. The hammer should enable him to imbue his will into his working — of course, he’ll also need to burn a significant object in the soulfire beneath the anvil. (Reaper, ch 18).

In book 10, Reaper, Eithan taught Lindon how to use the soul forge he traded from the lion king. With Eithan’s guidance, Lindon forged a hammer and a spear. He did this work in the powerful and ancient Labyrinth, which adds to the power of his forged construct.

Genesis is the name bestowed upon the hammer Lindon created in the Labyrinth in book 10, Reaper. It has two sides. One side is a claw hammer, created with destructive black flame madra. The other is rounded and blue-white, created with pure madra. One side for building, the other for destroying, perhaps.
Lindon immediately used his shiny new hammer (Genesis) to forge a weapon, dubbed Midnight, Cursed Spear of the Destroyer

In the Labyrinth, Lindon dissected an altered dreadbeast — a Hydra he dubbed a “baby Dreadgod” — to examine its core binding:

.. .lines burned with the pale, spectral green of death madra, running in veins all through the Hydra’s flesh. “This is.. .” Lindon had dissected his share of dreadbeasts, and it was hard to put into words how shocked he was by this sight. “. ..it’s so organized. This looks like a real set of madra channels. And how can death madra, of all things, possibly exist alongside real, living flesh?” (Reaper, ch 11)

Later, Lindon used the pulsing hydra binding when soulsmithing Reigan Shen’s broken death trident into a weapon: Midnight, Cursed Spear of the Destroyer. He also used “the bone ring set with the ruby, the object that had once given birth to the Bleeding Phoenix. He felt its weight on the world” (Reaper, ch 18) Later, he lost his new Midnight to Shen, who promptly stored it in his void space.