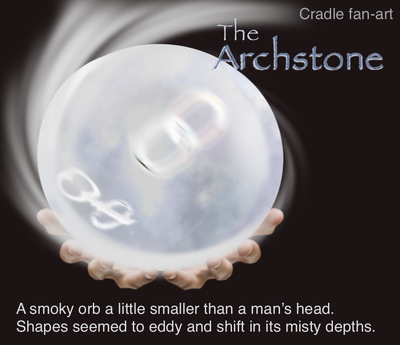 "...a box drifted up on a cushion of air. It was sealed with layers of script-circles, and even the Emperor had to use three different keys to open it. With great ceremony, he turned the box toward them and lifted the lid. Several of the others gasped or muttered at the sight of the Archstone, sitting on a cushion. The dull light within swirled as though with motion, and Eithan could sense its hunger tugging at their spirits even from so far away. After only a second or two, the Emperor shut the lid. Its scripts shone, sealing away its power once more. “The Archstone, as described in the Draconic Records. It was sealed deep in the western labyrinth, where Jai Daishou retrieved it.” (Skysworn)