Path of the Endless Sword

Limbs made of Sword Madra ending in a sword blade.

Yerin is the companion of Wei Shi Lindon and the apprentice of the Sage of The Endless Sword. Yerin and Lindon are adopted disciples of the Arelius Family under the order of Eithan Arelius. On top of that she has also joined the Skysworn. Recently, the Sage of Red Faith is obsessed with Yerin and her Blood Shadow, Ruby.

When first we meet her, Yerin is thin and scruffy. She looks like she has spent the past while camped out in the woods. She cuts her own hair with sword madra in a perfectly straight line to minimize its interference in combat. Initially, she wears a tattered black sacred artist's robe with a thick red cord tied around her waist. Her skin is covered in thin white, regular scars from practicing the Endless Sword technique.

Appearance as a Herald

Yerin is /was dedicated to her beloved master, the Sage of the Endless Sword. Now that he’s dead, she clings to his teachings and his memory. Also, after her master was murdered in Sacred Valley she’s been suspicious of supposedly kindly strangers. However, once she gives her trust, she is totally loyal, especially to Lindon. She is an intense person, brave but not showy, without an ounce of self-pity. Her words are few but honest; her speech is habitually pithy and straightforward, but not mean-spirited. She doesn’t know when she was born. She cannot read or write, but she is intelligent and frequently comes up with dry-as-dust analogies, metaphors and similes. She despises her Blood Shadow — a piece of the the Bleeding Phoenix — as it has murdered many innocent people, including her entire family. She fears being alone. She lost her entire family at about age 7 (see Skysworn). She lost her master at about age 16 or 17. She doesn’t want to lose anyone else that she calls friend or family. She values her relationships with Lindon, Akura Mercy, Ziel, Little Blue, Orthos the Sacred Beast, and Eithan Arelius. 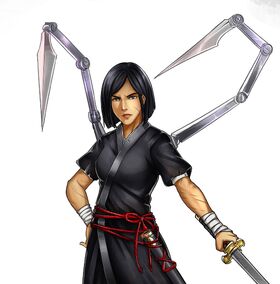 Yerin was known to be a genius in her hometown before everyone died to a Blood Shadow from the Dreadgod that passed overhead, the Bleeding Phoenix. Afterward, she held the bloody thing down and stopped it from attempting to kill the Sage of the Endless Sword. Although he was completely safe, he was impressed by her willpower and natural talent, and chose to take her on as his disciple, which caused his marriage plans to be thrown off. He challenged Yerin and she gamely took on many injuries and scars as he took her around the continent for training. He took her to the Frozen Blade School, to learn from his fiancée Min Shuei, also a Sage herself. From there, he took Yerin to Sacred Valley for training and to ask Subject One how to free her of the Blood Shadow. After his assassination at the hands of the Heaven's Glory sect, she was driven out of the temple they were using as a base. She met Wei Shi Lindon, avenged her master, and adopted his Remnant, thus advancing from Jade to Lowgold. The rest is history. . .

Yerin is a top-notch sacred artist on the Path of Endless Sword who is consistently able to defeat opponents of a higher level of advancement, or multiple opponents of her level. After she merges with her Blood Shadow Ruby and advances to Herald, she is on a second Path, and can employ a massive bloody Netherclaw.

While a Lowgold in Soulsmith, Yerin was able to defeat 3 other Lowgolds who tried to attack Lindon. In Blackflame, Yerin as a new Highgold was able to give Jai Long, a Truegold, fear for his own safety until he decided to escape. As a Truegold in Underlord, Yerin (along with her newly advanced Blood Shadow clone) was able to simultaneously fight both Kiro and Meira, Underlord-level opponents, at the same time. The outcome was that Kiro was heavily wounded and the underlords had to escape.

Yerin fought several notable duels in the 18th Uncrowned King Tournament. After advancing to Overlady/Herald in Wintersteel, she defeats Sopharanatoth with ease, winning the Uncrowned tournament and gaining Penance. She then shortly thereafter uses it to kill Seshethkunaaz, the Monarch of Gold dragons.

Sword Sage's Remnant: Yerin is bonded to the Sage of the Endless Sword's remnant. This grants her multiple other retractable limbs that end in swords, as well as access to some of the Sage's memories. Additionally, it has helped her touch the Sword Icon, connecting her to the Way, and greatly honing her spiritual sense.

Blood Shadow (Ruby): In Underlord, Yerin gains the ability to release her Blood Shadow, who is able to fight as an independent copy of her with all of her skills and abilities. She is well coordinated with her Blood Shadow. Yerin's control over her Blood Shadow and her resistance to it as a young child made her unique enough for the Sword Sage to choose her as an apprentice. During the Uncrowned tournament, her Blood Shadow has become its own sentient entity with feelings and desires and even took up the name Ruby. The Sage of Redmoon Hall, whose path she adopted to control the Blood Shadow, implies that she has made progress farther than even himself with Blood Shadows. After failing to grasp the Sword Icon completely and advance to Sage, Yerin and Ruby form a contract to merge into one entity before their final round against Soparanatoth. This advances Yerin to Herald, though called a pseudo-Herald by Akura Charity, as she has not yet reached the Archlord. Merging with Ruby is a significant turning point for Yerin as she no longer seeks to become the next Sage of the Endless Sword.

Path of the Endless Sword