Ziel of the Wastelands

Ziel of the Wastelands

Path of the Dawn Oath

Ziel of the Wasteland an injured Archlord on the Path of the Dawn Oath. He is originally from the Iceflower Continent. He is first introduced in book 5, Ghostwater. Gradually he becomes allies with Wei Shi Lindon Arelius and his friends.

Ziel was originally a young Archlord, excelling on the challenging Path of the Dawn Oath, mentoring his own Dawnwing sect, until the Stormcallers killed his sect and injured him badly. "One of the youngest Archlords ever, an elite among elites, fortuitously reduced to the level of a mere Underlord.” (Uncrowned, ch 14). He still has his extensive knowledge of Sacred Arts. His challenge in the series is to regain his wounded core and restore his Archlord strength. He strives to help others despite his suffering spirit.

On the Iceflower Continent, the Sage of Calling Storms mutilated Ziel's spirit. Ziel was a powerful Archlord at the time, with his own sect. He was injured while attempting to save his disciples who were fleeing from the Dreadgod Weeping Dragon and especially the Stormcallers cult. The Sage of Calling Storms (not yet named) deliberately mutilated Ziel’s core and cruelly stitched it together incorrectly, instead of leaving him to die. Ever since then, Ziel's spirit feels like it is shredded by broken glass splinters. After this injury, Ziel was left with a burning hatred for all Dreadgod cults, shown when he goes on a rampage against them in the 18th Uncrowned King Tournament. 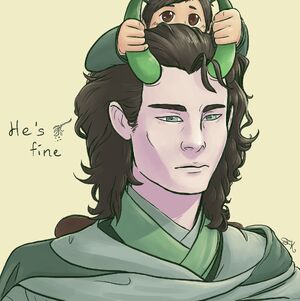 Art by Jazzy Kandra: Ziel and Kazan child, in Bloodline.

We don't know when Ziel was injured, but it coincided with a flyover by the Weeping Dragon and an attack by the associated cult Stormcallers.

Clue from Uncrowned: "Years of treatment at the hands of the Beast King had countered much of the poison, but he could still only barely be considered an Underlord . . He had drifted along like a dead leaf on the wind, formerly one of the proud geniuses of the Iceflower continent. He had fought as a champion of the Eight-Man Empire as an Underlord in the last Uncrowned King tournament.” (Uncrowned, ch 14)

So, when was the last Uncrowned tournament? Scheduling is irregular, based on demand. But Mercy attended one about 8 years ago, when she was a child, so he’s been injured at least that long, it seems.

Ziel represented the Monarch Northstrider in the Uncrowned King Tournament.

“I present to you Ziel of the Wastelands, chosen of Northstrider, Uncrowned of the Uncrowned King tournament, former leader of the Dawnwing Sect, and representative of the Akura clan and the Sage of Twin Stars. (Bloodline)

Relationship to Beast King and Northstrider

After he was injured, he went to The Beast King of the Wastelands for healing. The treatment helped alleviate the pain. Northstrider heard of him through the Beast King and had invited him to compete in the Uncrowned Competition. (Underlord, epilogue; Uncrowned, ch 14)

Ziel is 35 years old in book 7 but looks only 18. He wears a dusty gray cape and drags along a mighty war hammer. He always feels weary, due to his mutilated core. For his goldsign, Ziel has two upward-curving emerald green horns. They’re luminous green at the base and they run up the gradient to the points, which are dark green. “His Goldsign was so condensed as to look completely real.”

A young man stood there, emerald horns shining very slightly in the shadow of the trees that still stood around him. He wore a faded gray cloak, leaned on a hammer as big as he was, and wore an expression like he’d died two days before. (Ghostwater ch 16)

Monarch Emriss Silentborn gave Ziel a healing elixir, which helped but didn’t do the trick. In exchange for one year of service, Eithan offered Ziel a way to restore his shattered core spirit. Ziel accepted the bargain and Eithan treated him several times with elixir and a long-lost restoration technique — the Pure Storm Baptism, created by Tiberian Arelius. Healing occurs when Ziel sleeps with sparks of lightning madra playing through his spirit and over his body. (See books 8-10). In book 10, Ziel seems to have finally gotten back onto his feet.

Path of the Dawn Oath, the Path of brilliant soulsmiths and scriptors. It cycles force madra, with gravitational effect. Goldsign is two green horns on head.

The Path of the Dawn Oath has only two techniques, but the Oathsign technique is endlessly versatile. It involves Forging runes out of madra so they float in rings in midair, effectively creating scripts that have one of many different effects. The strength of the Path is its flexibility, the weakness is the precision and years of training that it required to master.

Excerpt: “The Path of the Dawn Oath had only two techniques, and Ziel used them both. The Stone Anchor, his full-body Enforcer technique, ran through him like iron bars reinforcing his skeleton. It bound him to the ground, so that with stable footing he could stand as though nailed in place. But the cornerstone of his Path was the Oathsign technique. He Forged eleven green, shining runes in a circle that hung in the air in front of him. This circle hardened force aura into a solid barrier that stopped physical impacts.” (Wintersteel)

Ziel carries a powerful two-handed warhammer. A genius with scripts, he can forge runes on the fly that magnify his strength, act as platforms, boost his hammer, and he can create many different boundary fields among other things.

Zeil was once the master of the Dawnwing Sect on the Path of the Dawn Oath and has experience in guiding young sacred artists. He offered a script tablet to help Linden, which might reflect elements of Ziel’s own Dawn Oath path. Excerpt from Ghostwater:

Ziel paced down the shelves until he found the tablet he wanted. The Script Lord, Archlord on the Path of Whispering Wind: the Creation of the Seven Principles. Ziel nodded to it. “For you. Try it.” (Ghostwater)

Ziel. He kept trying to rest, but wherever he went, the Sect of Twin Stars found him. They always found him. Someone had given Ziel the title “Master of the Training Hall,” and any students who needed specialized training hunted him down. Ziel tried his best to scare them off, but he was prevented from outright refusing by the oath he’d made to Eithan in return for the Pure Storm Baptism. The sect quickly figured out that he didn’t mean all the harsh things he said, and that became part of his charm. They sought his advice on everything from scripting to advancement to technique training to roommate squabbles.(Reaper)